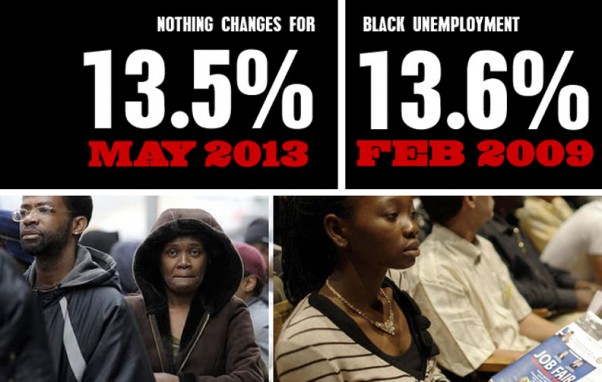 It’s all about ownership, really. Whoever owns the framework of any economy will be the beneficiaries of its wealth, along with those in their sphere of influence, of their culture and their race. Any economic opportunities left after that will go to whoever remains. This framework is an infrastructure that consists of elements with high barriers of entry and strongly needed by the occupants of the market. These elements are industries such as energy, transportation, communication, food, defense, etc. Those that runs these areas gain big contracts and outlive their wealth, only to hand it off to their heirs. In bad economies, those that peeked at the CEO and Executive positions and able to retire are sometimes forced back into the workplace. As the beneficiaries of businesses climb their way into retirement, those at the bottom of the food chain also see their careers blossom into promotions and increased pay. Those at the bottom are often Blacks. When CEOs and Executives return, everyone who climbed are pushed back down into slots they previously held. However, since reduction in pay and demotions are tough to justify and can result in horrible moral, it happens systematically by way of lay-offs. When the laid-off workers begin seeking new work, they start to realize that the only positions are available are positions beneath the ones they previously held.

Black workers often find ourselves push down below entry level opportunities and into extended unemployment. This is how this works. The key for black employment security is not hidden in policy or programs. It is hidden in entrepreneurship. The more economic opportunities created by Blacks, the greater the possibilities for a reduced Black unemployment rate. The problem is Blacks typically own businesses that only has an ethnic appeal. We don’t get into the high barrier high benefit industries, whether due to lack of capital, lack of interest or lack of patience. We want financial benefits now, so we spend largely as consumers leaving our children to start from scratch. Today, if a business is black-owned, the belief is it doesn’t apply to all across the board. It only applies to our group. Take my latest book, for example, the man on the cover is intentionally and unapologetically black. Though the contents of the book has no racial slant or undertone, has been marketed to the general population and applies ideas, tips and resources for anyone across the board, the purchasers of the book have overwhelmingly been black.

Poor people unemployed is a train wreck because when they were employed, many of them indulged in items that were reserved for the rich. They grab at consumables that make them feel like they are no longer living in the hood, but those who are able to escape the hood invest in items that allowed them to leave there. Unlike the owners and architects of the macro-infrastructure, they miss building their personal infrastructure to purse items of “feel good-look good”; items that do not lead to economic sustenance. There are Blacks who are able to rise up out of the trap of unemployment. But these individuals are not the rule, they are the exception.

Now, this unemployment saga isn’t fully the Black fault, nor is it full the White or Governmental fault. It is a compilation. Blacks justifiably fought for free will in America. It eventually happened. But there was little strategy in place for post-slavery, whether by Black leaders or Union Government. So, in essence free will was earned to a developmentally immature group who was systematically locked out of the education and economic vehicle in America. Yet, the exposure to entertainment was, and still is, wide and full. So, we grab hold to that, and because of free will, we cannot be forced to become educated economically. Tell our leaders to fight for that! Instead, they fight for us to arbitrarily receive benefits without understanding the responsibilities that come with it. At the time of our emancipation, the Black group was not used to freedom, power and choices but it happened to our entire group almost overnight. I would say it was like giving an 8 year-old, the keys to the house, to the car and access to the bank account.

If I had to age our group today, I would say we are collectively a 15 year-old: selfish, entitled, untapped power and arrogant. We resist criticism from other groups. We only cry when we don’t receive the same benefits other groups get. We only copy their recreational activities and not their activities of hardwork.

I think about us daily; where we are and where we are going. I often wonder if it will be safe for me to live in a Black neighborhood when I get older. I wonder what type of leaders will emerge. I wonder if there will ever be another black theology hip-hop base similar to the one in the 1990’s brought on by Public Enemy, KRS-One, or Arrested Development that spreads throughout our community. I think about it, but for now I write and speak with attempts to empower others to act for themselves, their families or communities.

I believe the Black community can recover but it will come by way of economic sacrifice and economic strategy. It will come when we focus on the lives we are creating for our children and grandchildren instead of simply seeking 9-5 work, which subliminally tells our children, “You are on your own.” We don’t seek enough asset ownership and frugal living. When we have leaders that focus on that for our group, instead of that for themselves, we will forever be the largest unemployed group, while these so-called leaders maintain their employment off the plights of Black people.