Skip to content
Home>Entrepreneurship>The Black Business Surge: Why Ownership is on the Rise

In 2021 alone, there were more new Black-owned businesses launched than at any other time in the last quarter-century, according to a recent Kauffman Foundation Annual Study. Just over 1.2 million African Americans were self-employed in February 2022, compared to slightly under 1.1 million in February 2020. There are several major reasons for the recent emergence of Black-owned businesses. Let’s take a look!

If ever there were a hint of a silver lining in the COVID-19 era, it may be the thousands of Black entrepreneurs who turned adversity into opportunity by starting businesses of their own. On average 380 out of every 100,000 African American adults became new entrepreneurs during the pandemic – up approximately 38% in each of the prior two years, according to the 2020 census data. This is a staggering increase and its effect has been seen on several different levels. For example, in the technology field a study from the website domain company GoDaddy found that Black owners have accounted for 26% of all websites created for new businesses since the pandemic began, compared to 15% pre-pandemic.

See the following chart as an example: 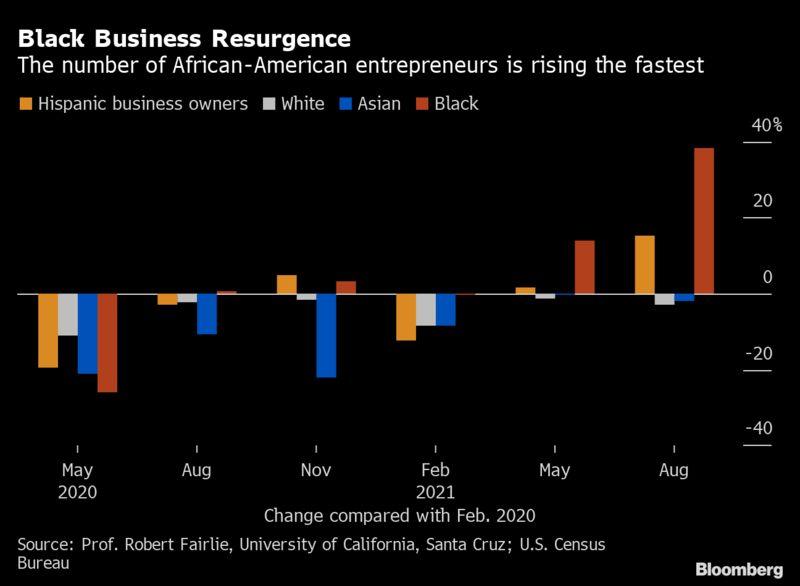 Next, from a financial standpoint, the surge has been partly a reflection of the unfortunate heavier toll the COVID-19 crisis took on Black Americans economically (such as death, jobs and income losses). With that said, job insecurity, including pandemic layoffs caused by Covid-related restrictions, prompted many people of color to explore alternative options, including starting small businesses.

Over the last few years, racial injustice and police brutality have been a major topic of national discussion. Most notably, the 2020 killing of George Floyd opened the floodgates in the past year for many major banks and big name companies to provide programs such as Chase Bank’s “Advancing Black Pathways,” to offer more support for minority small businesses and eliminate racial injustice.

As a result, many minority entrepreneurs have been helped to move forward in securing the funding and resources needed to launch their start-up brands.

“This is not a weird coincidence. There’s a lot of demand for goods and services, and a lot of people are realizing, ‘I can do that without having to work for anybody else,’” said Ron Hetrick, an economist at Emsi Burning Glass (now Lightcast).

Hetrick also pointed out that the cities with the largest increases in business formations in the past two years all have significant Black and Hispanic populations: Chicago, Detroit, Los Angeles, Houston, and Miami.

“The good news of this whole thing” he said, “is, when you see business formations occurring in very ethnically diverse populations, then that would typically suggest that you would start to see increased hiring from these populations as well.”

Women-Owned on The Rise

U.S. Black business ownership has also seen a rise thanks to female entrepreneurs, with Black women making up the fastest growing group. Experts say this emergence could be explained by Black women wanting more control over their work life. Inadequate pay, lack of childcare options, systematic biases, and workplace discrimination all played significant roles in prompting many to go into business for themselves!

Finally, just seeing new businesses start up can have a powerful impact on a community.

As these Black businesses start to thrive, it signals what is indeed possible.

Twitter and Amazon Back Accelerator Program For Entrepreneurs of Color